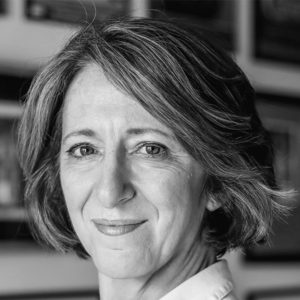 Anna Louizos is a New York City based Scenic Designer who has received multiple Tony Award nominations, Emmy and Drama Desk Award nominations for her diverse production designs. Broadway credits include School of Rock (also US Tour, London, Brazil, Australia, China, Korea -for which she designed both sets and costumes) In the Heights, Avenue Q, Irving Berlin’s Holiday Inn, Rodgers and Hammerstein’s Cinderella, Dames at Sea, High Fidelity, Honeymoon in Vegas, The Mystery of Edwin Drood, Curtains, Irving Berlin’s White Christmas, Golda’s Balcony and others. International productions include West Side Story for Tokios 360 Stage Around Stage Around, a theatre in which the revolving audience is surrounded by scenery.  Among her many off -Broadway and regional theatre designs some include the world premiers of The Altar Boyz, Tick, Tick…BOOM, Scotland, PA, Speech and Debate, Sons of the Prophet, Just Jim Dale, Franz Kafka’s The Castle, and Fly, the Musical. USA regional revivals include Romeo and Juliet, Crimes of the Heart, The Foreigner, The Substance of Fire, Much Ado about Nothing, and The School for Scandal for theatres from Connecticut to California.

As television art director credits include Sex and the City, Big Apple and Welcome to New York.

Louizos is also the founder and CEO of Broadway Design Exchange an online marketplace for theatre artists offering sketches, models costumes, and props for collectors.