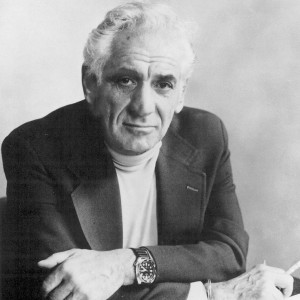 The composer, conductor, pianist, teacher and humanitarian Leonard Bernstein was born in Lawrence, Massachusetts, on August 25, 1918 to Russian Jewish immigrants. After his studies at Harvard College and at the Curtis Institute of Music in Philadelphia (under teachers such as the legendary Fritz Reiner for conducting) he became the assistant to Sergej Kussewitzky in Tanglewood in 1942 and worked from 1943 to 1944 as an assistant music director at the New York Philharmonic. On November 14, 1943 he stood in for the ailing Bruno Walter in a Carnegie Hall concert and overnight became one of the leading conductors in America. After three years as the Musical Director of the New York City Symphony Orchestra he assumed the same position in Tanglewood from 1951 to 1955 and then in the New York Philharmonic from 1957 to 1958, where in 1958 he succeeded Dimitri Mitropoulos as Principal Conductor. In the seventies, Bernstein was one of the pioneers to initiate the renaissance of Gustav Mahler’s work. In 1986, Leonard Bernstein helped Justus Frantz establish the Schleswig Holstein Music Festival. On December 23 and 25, 1989 he conducted Beethoven’s Symphony No. 9 in both sections of Berlin to celebrate the fall of the Berlin Wall.

Leonard Bernstein was the first superstar conductor in the USA. In addition to this work, which took him to all the major orchestras in the world and let him work together with the most famous soloists, he composed music for concerts, ballets, stage and films. He specialized in jazz and new music, with instrumental compositions that were just as successful as his vocal pieces. His best-known compositions include Fancy Free (1944), On the Town (1944), Peter Pan (1950), Trouble in Tahiti (1952), Wonderful Town (1952), Candide (1956), West Side Story (1957), Chichester Psalms (1965), Mass 1600 Pennsylvania Avenue (1976) and A Quiet Place (1983). He was a dedicated patron of the world’s youth throughout his lifetime. From 1951 to 1956 he was a professor at Brandeis University in Massachusetts and in 1951 he began his television career as a music commentator and teacher on shows such as Young People‘s Concerts. His works refute the deep-seated prejudice that both serious and entertaining music cannot coexist in the works of a talented composer.

Leonard Bernstein died on October 14, 1990 at his house in New York.