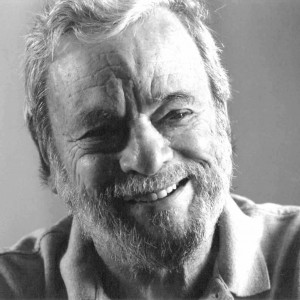 The composer and lyricist Stephen Joshua Sondheim was born in 1930 to a wealthy New York dress manufacturer. When his parents divorced, his mother moved to Bucks County, Pennsylvania, and young Stephen found himself in the right place at the right time. His mother’s neighbor was Oscar Hammerstein II, who was at the time working on the musical Oklahoma!. It didn’t take long for the adolescent boy to discover his fascination with musical theater, and he consequently began studying music at Williams College in Williamstown, Massachusetts, and later composition with Milton Babbitt. Like Oscar Hammerstein he would write the occasional pop song (with Jule Styne for Tony Bennett) and dabble in film, but like Hammerstein, his true love remained the theater.

He was President of the Council of the Dramatist Guild from 1973 to 1981. In 1983 he was elected to the American Academy of Arts and Letters and was appointed the first Visiting Professor of Contemporary Theatre at Oxford University in 1990.

Stephen Sondheim is one of the most successful artists of the musical and theatrical world, who gained nearly all important prices and awards. He is the only composer in the world to win seven Tony Awards and has been honored with the special Tony Award for “Lifetime Achievement in the Theatre” in 2008 and won several Grammys and Olivier Awards. He received the Pulitzer Prize for Drama in 1985 for Sunday in the Park with George and also was honored with the Academy Award for his Song „Sooner or Later (I Always Get My Man)“ from the movie Dick Tracy.